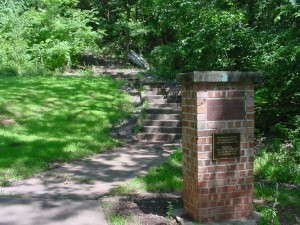 Silk Stocking Row refers to the section of 8th street west of Manvel and running three blocks to Price Street.  The name started around the turn of the century when all the wealthy people of Chandler built large extravagant homes along this street to show off their fortunes.  Because of the affluence of the residents, the street was nicknamed Silk Stocking Row because only very rich women living in these mansions could afford real silk stockings.  Many of the fine homes remain today in the care of homeowners carefully preserving or restoring the buildings.  The oldest structures on the street are the Miller home built in 1898, the Erwin home (also known as the Bill Tilghman House) also built in 1898, the Seventh Day Adventist Church built in 1899 and the First Presbyterian Church built in 1894 and the only structure in town to survive the 1897 tornado.  Annual tours are given in the spring and at Christmas by homeowners and members of local historical preservation groups dressed in 1907 costumes.

Born July 4th, 1854 at Fort Dodge, Iowa Bill Tilghman’s life was one of close brushes with death. By age eight he was hunting for food for his family while his father was away fighting in the Civil War. At nineteen, he was a professional buffalo hunter, and at twenty-four he was the undersheriff for Bat Masterson. Six years later he became the Marshal for Dodge City, Kansas.  He helped clear the streets of Guthrie, OK during the first Oklahoma land run in 1889. Later, he claimed a homestead near Chandler in the second land run in 1891 for former Sac and Fox lands which became Lincoln County.  He was then appointed Deputy U.S. Marshal. He served as marshal of Perry, OK to contend with problems of its “Hell’s Half Acre”.

Back home near Chandler, he raised fine racehorses at his homestead farm. He was City Marshal, then State Senator followed by becoming Oklahoma City’s Police Chief in 1911. The peaceful arrest of outlaw Bill Doolin was the most famous of his long career.  Tilghman and friends U.S. Marshals Heck Thomas and Chris Madsen were known as Oklahoma’s “Three Guardsmen”.

With Chandler photographer Bennie Kent, Tilghman established the Eagle Film Company in Chandler in 1915.  They produced a silent film “Passing of the Oklahoma Outlaws” featuring townspeople, a few real outlaws and lawmen as well as Tilghman himself. The film can be viewed at The Museum of Pioneer History in Chandler, OK. When Cromwell, Oklahoma needed taming in 1924, during the oil boom days, Oklahoma’s governor called Bill Tilghman out of retirement and sent him to active duty at the age of 70. There he was killed while making an arrest. His body lay in state at the Capitol in Oklahoma City, and was later buried at Oak Park Cemetery, at his longtime hometown, Chandler.

James Brooks Ayers Robertson, a Chandler lawyer, served as Oklahoma’s fourth governor, 1919-1923. Elected county attorney in 1900, he later assisted in drafting provisions of the state constitution. After appointments to Judge, Tenth Judicial District, the State Capitol Commission, and the Oklahoma Supreme Court Commission, he made several unsuccessful efforts to be governor and U.S. Congressman. He won the 1918 governor‘s election and was the first to be inaugurated in the new state capitol building. Known as the “father of good roads”, he called a special session to consider the women’s suffrage bill and served a challenging four years with accomplishments.